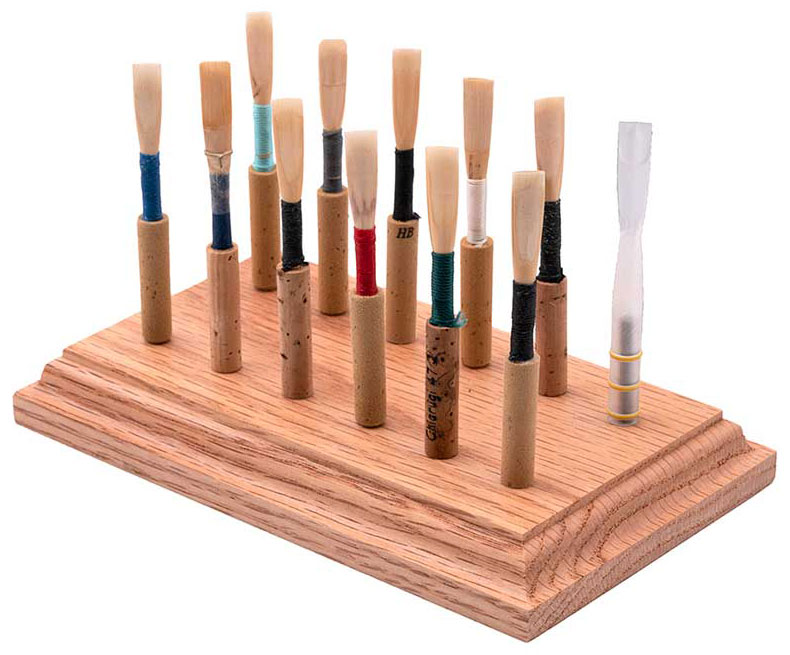 I have tried eight of every oboe reed that we sell at Hodge Products in order to give you a good overview of the qualities of each of the types of reeds. Before we start, let me say that every oboe player is different. Their physiology is different. Their instruments are different. Their ideal sound is different. So each player’s ideal setup combination is unique. My physiology includes thin lips which affects how well I can cover a reed thereby affecting the vibrations of the reed. Because of my thin lips, I need a reed that has more of the warm, dark tone built into the reed. A person with thicker lips can play a reed that is brighter and more strident in tone and naturally cover the sound more with the lips (using your lips to dampen or reduce the prominence of the higher overtones) so the overall result is warmer and darker. I play a Lorée FE series oboe with a bell that has been reamed out to match a D series bell which has given me a more stable upper register than I had before.

Each reed is made by a different oboe player with their own different physiologies, instruments, and tone goals. What should be similar is that the reed needs to vibrate evenly. This is the main characteristic that makes a reed worth buying at all. After that, the other qualities are going to be of interest for the individual players and their setups. I will try to summarize the descriptions of each reed to fit various types of players as well as present a chart organizing the reeds into types. But first, what do the words mean that I will be using to describe the tone of the reeds?

This chart separates the tone descriptions into what is considered desirable and undesirable. Understand that each of these paired tone descriptions is a spectrum, and good reeds or even the ideal reed is a balance of each spectrum. The reed you prefer will be based on which sound concepts or needs are most important at any given time in your playing life. 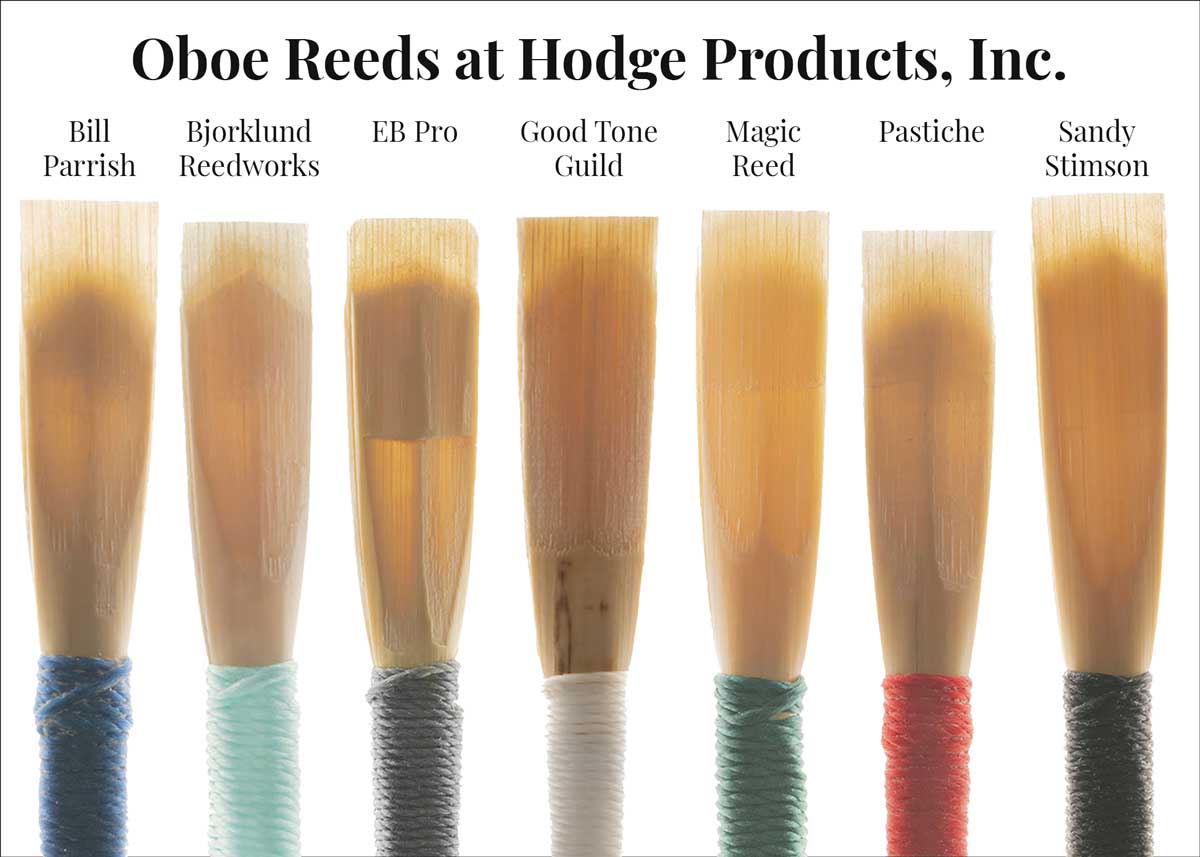 Bill Parrish’s reeds are the best reeds I’ve ever tried. I actually tried thirteen reeds in one sitting instead of eight and every one of them was really nice. They typically have a warm, full sound, are well balanced, and dark. I would even add that some of the reeds had an extra richness that was amazing. Bill’s reeds are of a medium strength and usually have a medium opening with good response. They typically started off slightly low in pitch but came up to pitch as they were played. My only concern is that for someone with thicker lips, these reeds may be too covered sounding and the rich, full sound may be lost. These reeds have it all for the person with thin lips.

Bjorklund reeds are overall good quality, consistent reeds. I didn’t find a single one that was not playable or severely lacking. The medium reeds were the most consistent in all areas. These are called student reeds but they could be played by professionals.

Generally the medium soft (MS) reeds had a warm, full, dark sound, were of a more medium hardness but were less open than the reeds labeled as medium. They all had a quick response and good articulation.

The medium reeds almost all played in the medium range of hardness with a good, open tip. They had a round, warm, full, and dark sound, good articulation, and a quick response. They all tended to have a flat crow but that didn’t have a consistently negative effect on the pitch. The pitch varied between being good to being a little flat. This could be easily managed by just closing down the reed a little.

The medium hard (MH) reeds also had a full, open tone with a bit more projection, but these reeds tended to be harder to control. This can be a good thing if you are used to using a lot of lip muscle as you will be able to manage these reeds well while having plenty of flexibility in the reed. They vary a bit in hardness between MH and Hard and you may even find some that feel more like a medium.

Overall EB Pro reeds are very vibrant and open. They have a warm, dark, full sound. They are flexible with a good response.

The medium reeds are quite responsive with a medium to medium soft feel. They all have full openings which require a bit more lip control but also allow them to be flexible

The MH reeds are a little stiffer but still have the full, dark, warm sound. Some of these also have a bit more edge to the sound which can help with projection. They are less consistent reed to reed than the medium.

Good Tone Guild Rookie reeds are definitely more of a student reed. The MS and medium tend to be very easy to blow and tend toward buzziness. They still have a dark tone though. Overall, they are too open and flat. That can be remedied by squeezing the reed shut and closing it down quite a bit which also helps with stability. The mediums are the most consistent from reed to reed. However, if you’re looking for a very easy beginner reed, you are more likely to find that in the MS. Overall, these reeds have a good tone for a student reed. They just need to be squeezed shut before playing (after soaking) to make the opening smaller.

Légère has made an amazing reed out of a synthetic material! They have a dark, warm tone. The quick response is extremely consistent. I can play a low C at pianissimo easily on the MS reeds. And I don’t even need to soak it! They are extremely well balanced and require very little lip manipulation. There are only two down sides that I have experienced in using the MS. The upper register tends to be flat if the reeds are played in the normal American fashion. I have found that if I just roll in a little as I go into the upper register, everything sits perfectly in tune. It was not that hard to adjust to this. The other negative is that there is not a lot of tone color variation in these reeds. I miss the color choice but have found that the amazing stability in every other way makes up for that lack, especially as I am not in good enough playing shape to have the endurance to work with less stable but more colorful reeds. The medium reeds are equally stable with a beautiful tone. They are more resistant than the MS. The MH reeds are more resistant still and require more air than most Americans like to give, but if you like a stiff reed, the MH will be a great reed for you.

The price point of this reed will undoubtedly startle many a player but a few things need to be considered here. As a synthetic reed, it will last much longer than the traditional cane reed. With regular playing, it can last a month without change. Eventually it will be more closed and a little less full sounding but will still play consistently for months more. This may not be acceptable for a professional but a student will probably not be as aware of the subtle changes and can happily play on this reed for months. It only takes the purchase of 6-7 reeds to equal the cost of this and most players go through more than that in a month or two depending on their level of playing and amount of playing.

Magic Reeds are extremely consistent from reed to reed. They are a stiff medium hard, leaving plenty of room to adjust yet they already have a full, strong tone for those who like a stiffer reed.

Pastiche reeds are the most consistent cane reeds I’ve ever tried, especially the medium hard (MH). The tone can be described as warm and dark across the board. The main difference between the medium and MH is in the opening. The mediums are naturally less open and respond more easily and are easier to blow while they still have the same warm, dark, full tone as the MH.

Sandy Stimson’s reeds have a lot of potential. They are very open and are more of a MH strength at this point. However, they will likely need to be scraped to balance them and make the response more consistent. These are great reeds for teachers who know how to finish reeds for students.

Following is a chart showing a comparison of all the characteristics between the reeds being discussed. 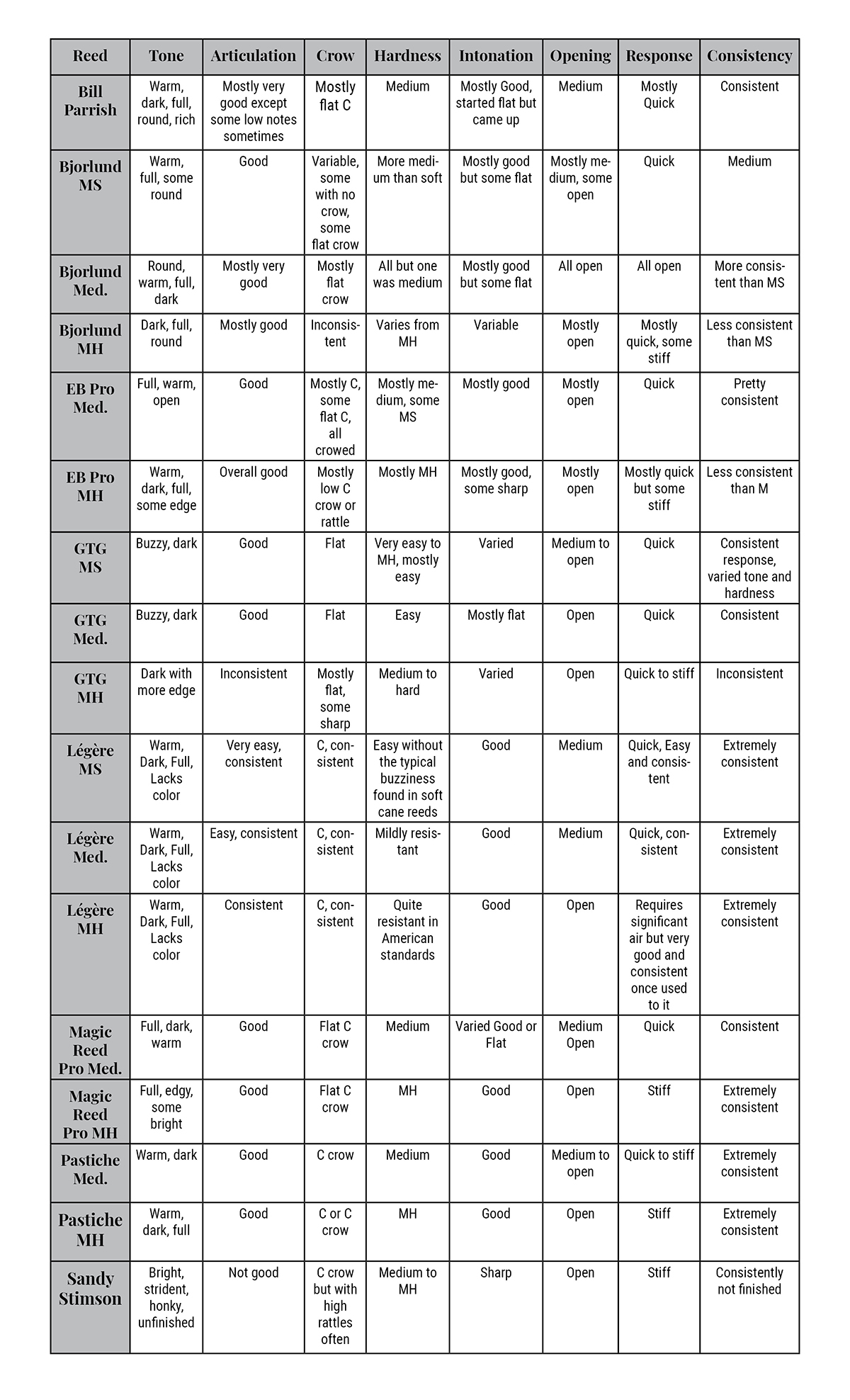 This chart may be helpful in seeing what strengths of reeds are available and their price points. For a beginner, the GTG Rookie MS is recommended. For all other young players or older who like a soft reed, the Bjorklund MS makes a good choice. For most student players and professionals who like softer reeds, any of the medium reeds are a good choice. Make sure to have read the descriptions of them to make the right choice for you. If you like a lot of resistance, the most consistent MH reeds are the Légère, Magic Reed, and Pastiche. Make sure to try HB and Sandy Stimson only if you or your teacher knows how to adjust reeds. The chart is ordered by price. 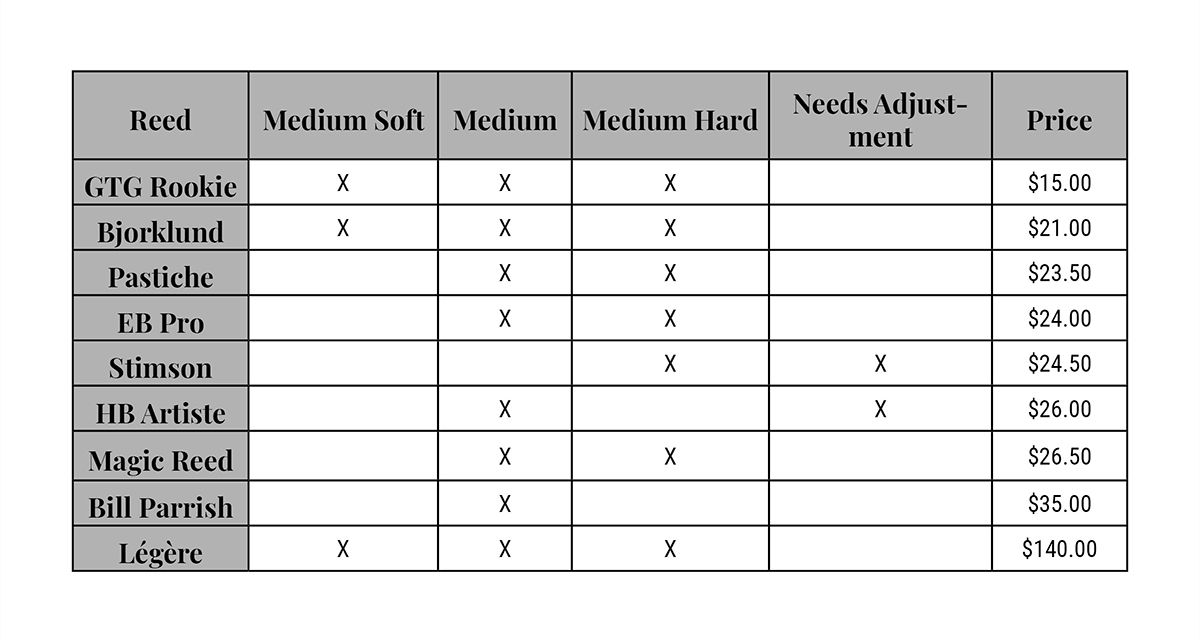 About the Reed Makers

Other factors that affect how a reed maker makes their reeds are where the maker lives, and the teachers that have influenced them. This chart gives a little more information about the makers for those who understand the meaning of these influences. 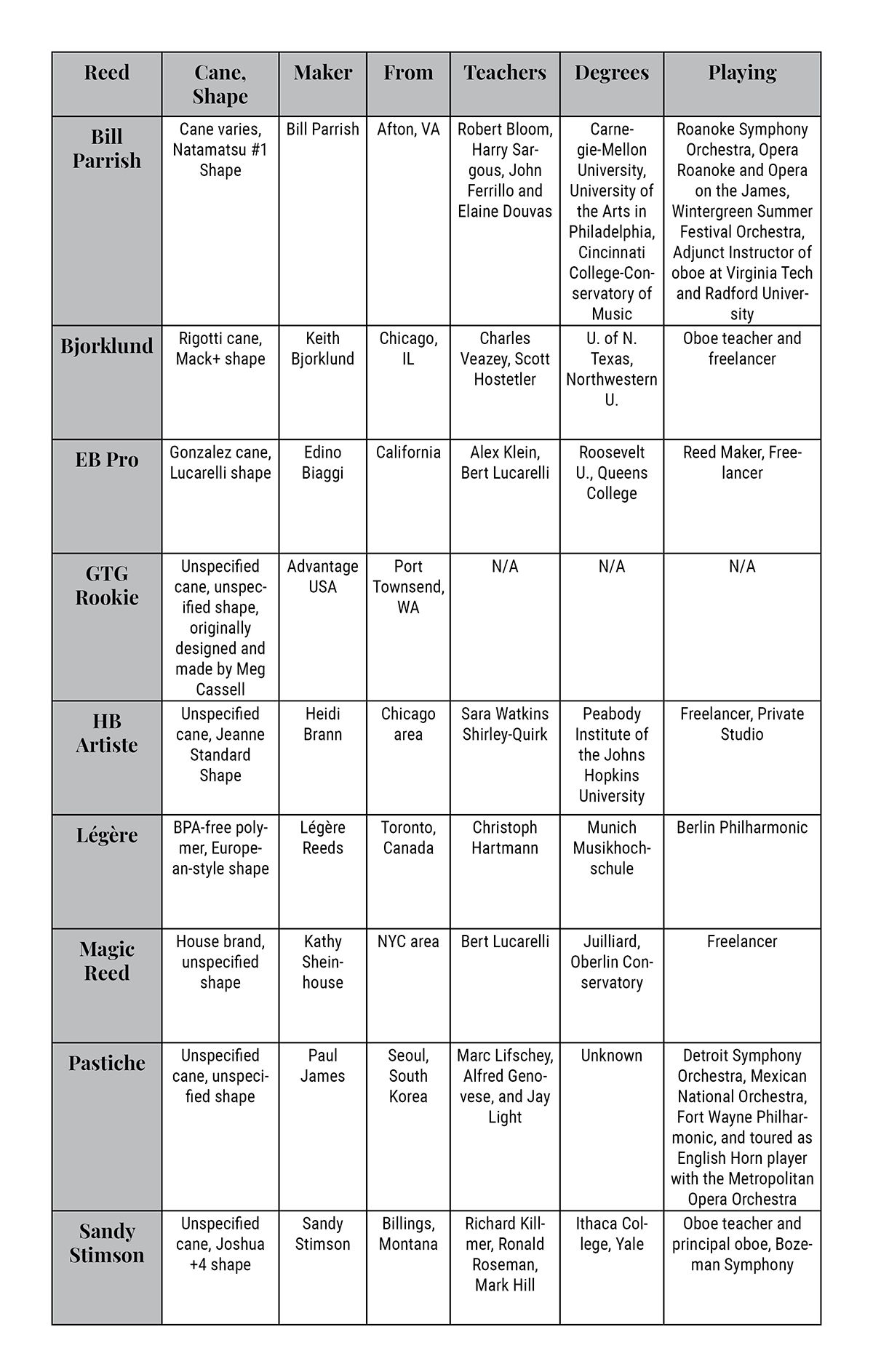 I hope all of this information helps you understand the many different aspects of oboe reeds and how to determine which reeds might be best for you. Keep in mind that you will evolve in your playing and that you may prefer or need a totally different style of reed within a year or even a few months...and there’s nothing wrong with that! Our job at Hodge Products is to understand your current needs and help you to find the reeds on which you sound best right now. We are always happy to help!