Go Back to Introduction


4 Effects Staples Have on Your Oboe Reeds

This is the obvious one. We all know that the length of the staple affects your overall pitch: the shorter the staple, the higher the pitch and vice versa. This change occurs at about 5 - 6 cents per millimeter on the lower A (A4). Typically, in America, 47mm is the best length for playing at A=440 Hz with an American long scrape on narrow cane. Europeans more typically use 46mm staples to play at A=442 Hz with a short scrape and wider cane. Shorter staples may also be desired in America to compensate for a flat oboe or a wider cane shape.

While using a shorter staple raises the pitch by 5 - 6 cents per millimeter, it is not an equal change throughout the scale. Other aspects need to be adjusted when changing your staple length to keep your scales in tune with themselves. This process is beyond the scope of this article. See Graham Salter’s book, Understanding the Oboe Reed, pp. 72-82 for details on how to do this using the “Golden Ratio”.

The size of the staple tip, base, and overall internal volume also affect pitch. In general, a larger staple plays sharper and a smaller staple plays flatter.

For example, a small-based staple raises the pitch of the lower octave, but causes the upper half of the second octave to become increasingly flatter. To keep it in tune, the staple tip can be enlarged, which straightens the taper significantly. This would result in stable, easy low notes with better projection, at the cost of reducing the dynamic range. On the upper register the opposite effect could be seen, the high notes would have less focus and projection, but would have greater dynamic freedom and command.

Finding the perfect combination of staple length, staple dimensions, and cane shape is critical to ensuring the oboe plays in tune with itself, which also influences the quality of the tone.

How do staples affect tone quality?

Tone is affected by the size of the staple base in particular.

A small-based staple produces a darker, warmer, and sweeter tone, easier low notes, and a more secure dynamic range. However, this is at a cost of lowering the second octave region, especially above A5.

In contrast, a large-based staple plays with a fuller tone but is harder to control and has the potential to sacrifice tonal refinement if the staple is too long. 46mm staples may be beneficial when experimenting with a significantly larger base.

Tone is also affected by the metal or other material that the staple is made of. The most common material is brass, which bears a traditional sweet tone. Nickel-silver, on the other hand, has a brighter sound with more projection. 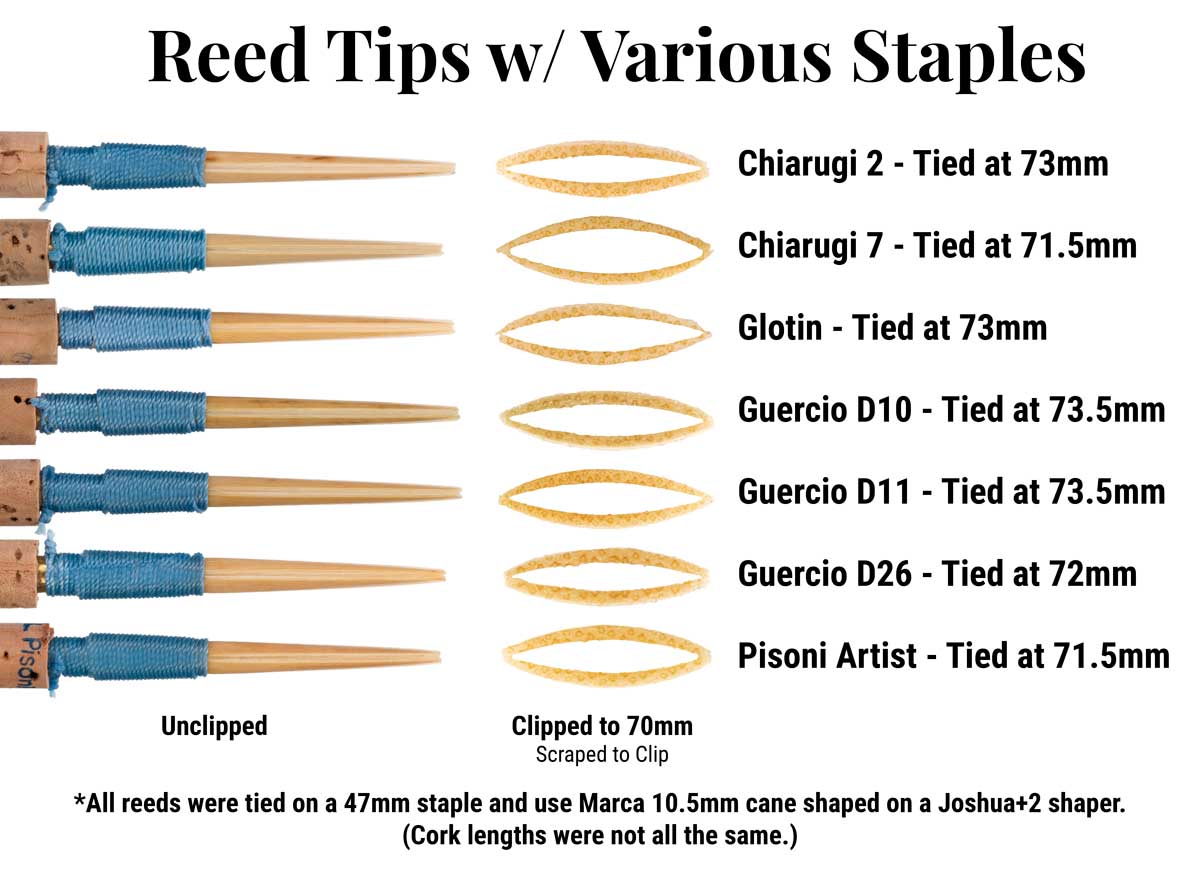 Can the staple change the opening of the reed?

The size and shape of the staple tip affects the opening of the reed both at the back near the thread and potentially at the tip.

The larger, rounder, and thicker the staple tip, the shorter you have to tie the cane on, and the bigger the opening of the reed near the thread (often called the throat).

Conversely, the smaller, flatter, and thinner the staple tip, the longer you have to tie the cane on, and the more closed the throat.

Due to the tension that is created in the cane by pulling the thread extra tight at the staple tip, the opposite affect from the throat is created at the tip of the reed. This can be compensated for by letting off some tension on the last wind before the top once the reed sides have closed.

It is important that you’re careful with your tie-on length to leverage the cane properly. The cane sides should just close 1-2 winds below the staple top before winding to the top and crossing over. This may mean tying the cane on as short as 71mm or up to 74mm depending on your staple/cane shape combination. Most staples and cane shapes in America require a tie-on length between 72 and 73mm. Notice the different tie lengths in the image above. In addition to leaky reeds, being careless in this area could exaggerate the effects of the tension between the throat and tip of the reed in undesirable ways. See p. 60 in Understanding the Oboe Reed for more on this subject.

You may not have thought about staples affecting projection before. Graduate student Wolfgang Draving used computer modeling to study air flow concentration and velocity in oboe staples.1

He discovered that because the inlet (staple tip) is elliptical, the flow concentration when exiting the staple is still somewhat elliptical, not circular. Therefore, staples with higher ellipse ratios (i.e., flatter staples) also have air exiting the staple in a more elliptical concentration. This in turn can cause notes using the F, the forked F vent key, and 3rd octave vent key to play brighter and more loudly, since those keys are located on the sides of the instrument where the air flow is more concentrated.

There is a relationship between vertical air flow concentration, air speed, and the exit area. Basically, assuming air flow is equal, larger-based staples project less because they have a lower flow concentration and air speed at the exit area, while smaller-based staples project more because flow concentration and air speed are higher at the exit. The staple base area affects this more than the tip area. However, it is more work to blow into an equally smaller-tipped staple and make the airflow equal to a larger-tipped staple, so in practice the effect is less pronounced.

This general concept may be why German orchestral players favor the Guercio D12 with its relatively average tip size which avoids excessive back pressure paired with a smaller base which keeps the air speed and flow concentration higher for greater projection.

In the following chapter, we will look at the varied characteristics of the oboe staples and how they contribute to these effects on the oboe reed. Click on the button to go to Chapter 2.

1After a thorough study and reanalysis of the models provided in Air Flow Analysis of Oboe Reed Staples by Wolfgang Draving, we have come to some different conclusions than presented in the article.

We reanalyzed Draving's Table 2 and concluded that reducing the staple base opening in relation to the staple tip (top-to-bottom ratio) (i.e., straighter staples) causes a small reduction in back pressure (i.e., pressure drop). Additionally, increasing the ellipse ratio at the tip (i.e., more elliptical staples) also results in slightly lower back pressure. This is directly contradictory to Draving’s own conclusion, which states that, “There is a slight relationship between outlet/exit area and pressure drop, meaning, in general, staples with a smaller opening at the far end of the tube show a higher pressure drop and thus higher resistance.” Together both the tip ellipse ratio and the top-to-bottom ratio have only approximately 3% of the effect that changing the tip area has and are thus insignificant.

Additionally, Draving made several assumptions that may have colored the results.