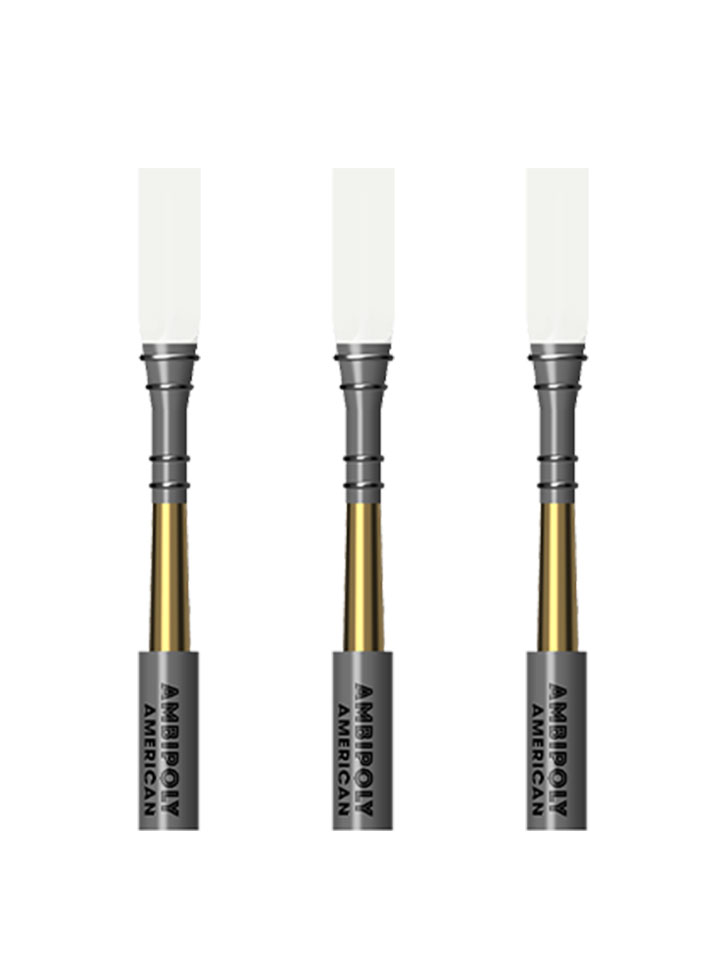 For years, if American oboists wanted the consistency, longevity, and stability that quality synthetic oboe reeds offer, they have been forced to struggle with European-style reeds completely different from what they were used to. That struggle is over!

For those of you who’ve had the opportunity to try Ambipoly’s beta American-style oboe reeds at the 2022 IDRS Conference in Boulder, I have been told all your comments and criticisms were taken into consideration in producing this. They certainly fixed the issue of being too closed that I commented on at IDRS. Let’s dive in.

On the original staple, the crow is right on C6, albeit in the middle of the reed. When you go down to where you would normally get a crow by the thread, it squeaks. It remained on a C when I changed to a Chiarugi 5, 46mm staple.

I’m very excited about the possibilities in this reed. It was very responsive with a warm, round tone, just as they advertise on their website. It was easy to articulate and play on like a decent cane reed. It has a good opening; you don’t want to bite and you don’t need a tough embouchure. If you prefer thicker, harder reeds so you can get a dark, covered sound, these reeds probably aren’t for you. With an open embouchure, the reed is very responsive to changes in dynamics and articulation, tone color and range.

It’s responsive with a clearly felt heart, back, and spine. (It is difficult to see it though because the polymer is so clear.) The tip is fairly long and clearly defined at the sides but flows smoothly from the heart to the tip. A second level of thinness is achieved near the end of the tip, making the reed very responsive. The manufacturer leaves the very end of the reed slightly thicker, though, so the player can customize the resistance of the reed. I scraped off this thickness for a smooth scrape to the finish. This freed up the reed to vibrate without what I felt was unwanted resistance.

The shape is Ambipoly’s proprietary shape that was chosen because it worked the best with the material. Unusually wide for an American reed, it makes up for it in the straight sides that only narrow near the bottom.

The Ambipoly American Reed comes on a #1 46mm K. GE Bocal Keflon staple. Unfortunately for me, the Keflon material that replaces the cork is too narrow for my large reed well, so I had to wrap a bit of Teflon tape around the staple to hold it in place. This probably won’t be an issue with other oboes. 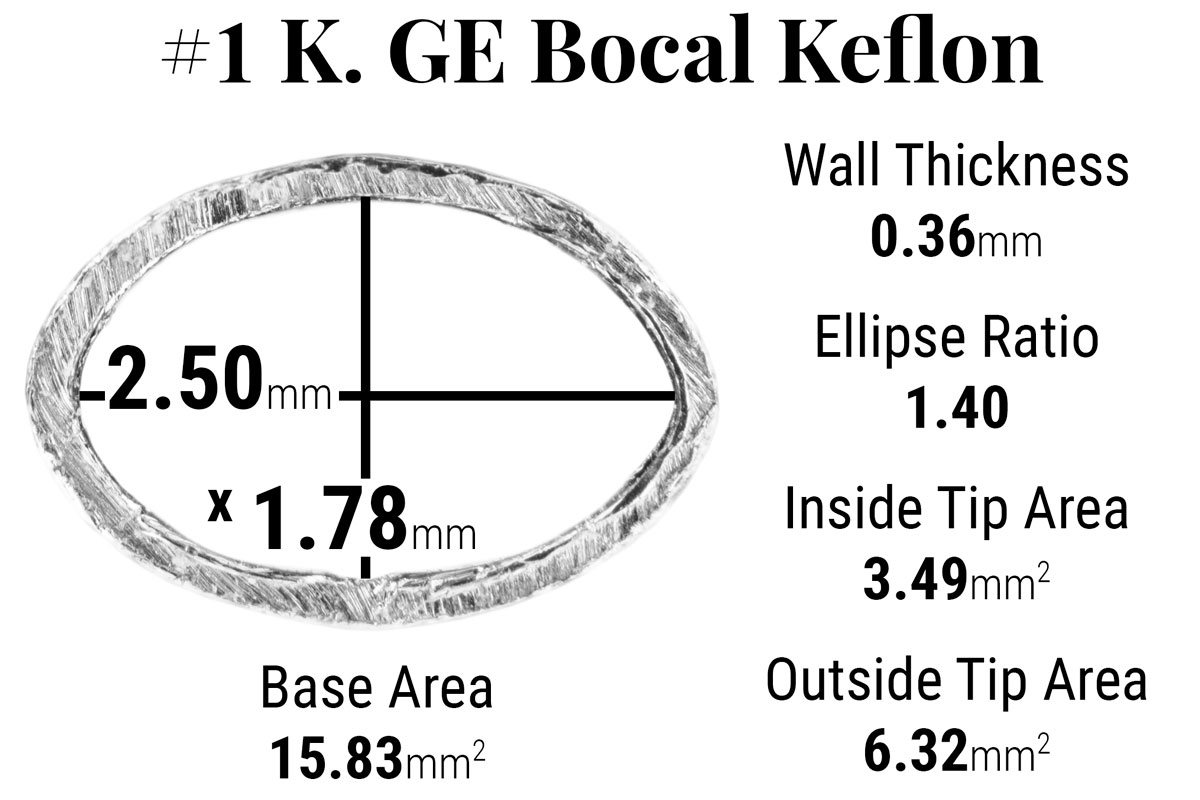 The #1 46mm K. GE Bocal Keflon staple is thick-walled, with a very small flat tip similar to the Glotin Double Star. The base is also extremely small. To see how this affects your reed and how changing the staple might fix specific issues with your reed please read our blog on Staples. 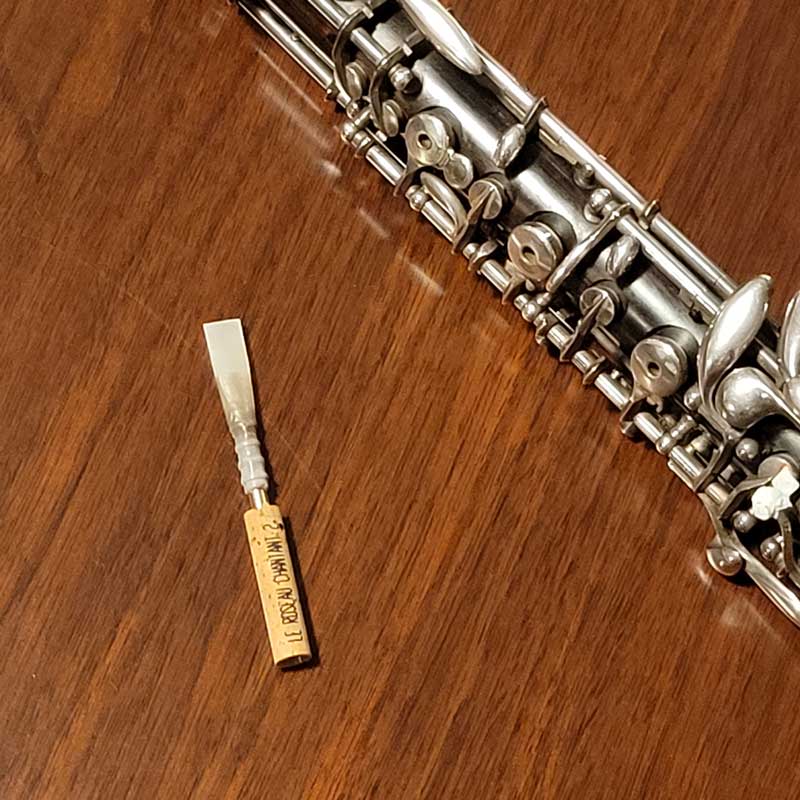 The reed is designed to be able to be removed from the staple and placed on a staple of your choice. This adjustment will not necessarily be needed by everyone who tries these reeds since each person’s oboe is unique, having its own individual pitch idiosyncrasies. However, it is a great advantage to be able to change staples to one that works better with your individual oboe.

Changing the staple can also change the length and therefore the pitch of the reed. Staples with small outside tip diameters will shorten the reed, while large ones will lengthen it. See the Outside Tip Area Chart in our Staples Blog to see what staples are like the K. GE staple and learn what options might work best with the reed.

Shortening the reed by 1mm the staple encroaches on the blades. Our experimentation shows that the Marigaux 2, and Loree DM are the only staples that are so small that the staple encroaches on the blades and shortens the reed by more than 1mm. Despite that, both play okay as 47mm staples, if a little out of tune. Interestingly, the pinched tip on the Guercio D10 allows the reed to stay the same length while also providing a narrower tip opening.

In general, the two reeds I tried were a bit flat in the upper register and the intonation was not even throughout the scale. Based on experience trying different staples, I knew that the staple could influence the scale as well as the overall pitch, so I tried a variety of different staples with the reed. Currently, I’m enjoying the Roseau Chantant 2 in 47mm with this reed. The 47mm works because the staple goes up 1mm farther, so the reed length doesn’t change.

While trying other staples, some sounded really bad on the Ambipoly reed. The Guercio D11 gurgled and simply didn’t play. The Guercio 1 didn’t have a good sound although the intonation was ok.

Yes! You can scrape on this with a regular reed knife. It felt harder than cane. I needed to put more pressure behind the blade and not as much came off, but you can definitely scrape this like cane.

Ambipoly reeds are designed to be playable out of the box, but to have enough material left to make any adjustments you want. I felt like this reed plays like a medium and could have used a little more material in the rails to help with intonation.

The reed comes with a thicker tip to allow for adjusting. As I mentioned earlier, I scraped the thicker cane off at the end of the tip and freed up the vibrations. I didn’t find clear areas where I would want to scrape off more.

There are no windows in these reeds, but I did not feel a need for them.

I am very happy with the reed I’ve been experimenting with. I think it is a great practice reed for me, but I’m not going to bring it to a concert. While this is probably an issue with any reed that is ready to play, there was more material taken out in some areas than I would prefer. This difficulty in adjusting it, which resulted in some intonation issues for me is the reason this reed isn’t going to be played in my next concert.

However, these issues are absolutely not going to be universal. I’m sure this reed will make a fantastic concert-quality reed for somebody else. It is amazing how far synthetic reeds have come, that we are considering replacing our cane reeds with one in a concert.