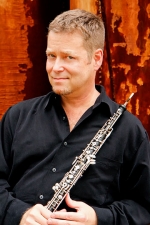 William Parrish is the principal oboe with the Roanoke Symphony Orchestra, Opera Roanoke and Opera on the James as well as a member of the Wintergreen Summer Festival Orchestra. He is also Adjunct Instructor of oboe at Virginia Tech and Radford University. Bill served as the Associate Director of Pre-College at the Juilliard School for ten years and has played with the Metropolitan Opera Orchestra, New Jersey Symphony, San Francisco Symphony and Honolulu Symphony Orchestra. Mr. Parrish received his BFA in oboe from Carnegie-Mellon University, his M.M. from The University of the Arts in Philadelphia and an Artist’s Diploma in oboe performance from the Cincinnati College-Conservatory of Music. He was a prize winner in the 1988 Lucarelli Oboe International Solo competition at Carnegie Hall in New York City. Bill’s principal oboe teachers include Robert Bloom, Harry Sargous, John Ferrillo and Elaine Douvas. Mr. Parrish maintains a vibrant and successful private oboe studio in Lynchburg and is a founding member of the Cardinal Ensemble.