Laila Storch is a world-renowned oboist in her own right, but her book honors Marcel Tabuteau, one of the greatest figures in twentieth-century music. Tabuteau studied the oboe from an early age at the Paris Conservatoire and was brought to the United States in 1905, by Walter Damrosch, to play with the New York Symphony Orchestra. Although this posed a problem for the national musicians' union, he was ultimately allowed to stay, and the rest, as they say, is history. Eventually moving to Philadelphia, Tabuteau played in the Philadelphia Orchestra and taught at the Curtis Institute of Music, ultimately revamping the oboe world with his performance, pedagogical, and reed-making techniques.

In 1941, Storch auditioned for Tabuteau at the Curtis Institute, but was rejected because of her gender. After much persistence and several cross-country bus trips, she was eventually accepted and began a life of study with Tabuteau. Blending archival research with personal anecdotes, and including access to rare recordings of Tabuteau and Waldemar Wolsing, Storch tells a remarkable story in an engaging style.

This is the paperback version. 624 pages

Appendix 1. Introduction and Text Transcription for the Tabuteau-Wolsing Audio Files
Appendix 2. The Students of Marcel Tabuteau at the Curtis Institute of Music
Appendix 3. The Tabuteau System: Essay and Outline by Marc Mostovoy
Glossary of Terms Used by Oboists
Notes
Selected Bibliography
Index

"[Storch's] personal descriptions of what it was like to study with this mercurial genius are absolutely fascinating; they provide indispensable glimpses for this generation of oboe students, not to mention future ones."

"Laila Storch's biography of Marcel Tabuteau provides a detailed and intimate portrait of the life and artistry of the man widely considered to be the father of the American school of oboe playing. Vol. 33, No. 2, Summer 2010"

"[This biography is] movingly personal . . . . may prove to be one of the most accomplished and important musical biographies of the 21st century.8/1/10"

"This book will be informative, interesting, and beneficial for anyone who is involved with the performance of music in the United States, whether in the field or in academe.June 2009"

"Laila Storch . . . is generous in her admiration of [Marcel Tabuteau's] compelling artistry. She has produced a monumental tribute to an extraordinary musician whose influence remains alive in each generation of American oboists.87 Summer 2009"

"Storch's intriguing book will appeal to a broad audience, not just oboists. Anyone interested in music will find Tabuteau's philosophies and Storch's research beneficial and applicable.January 2009"

"Ms. Storch's style is descriptive, informative, and engaging—a nice blend between the historical and the personal. This volume gets my vote as the winning historical profile of one of the most influential and revered performers and pedagogues of our time—Marcel Tabuteau. A must for every serious musician's library."

"In this volume, Ms. Storch cleverly captures the essence of Marcel Tabuteau, one of the finest musicians and greatest teachers of his era and whose unique perspective profoundly influenced classical music for generations to follow. The stories she tells about this remarkable man are, at once, poignant, witty and right on the mark."

"Everyone always said that a book ought to be written about that unique and extraordinary man, Marcel Tabuteau. Now, at last, the book has arrived." 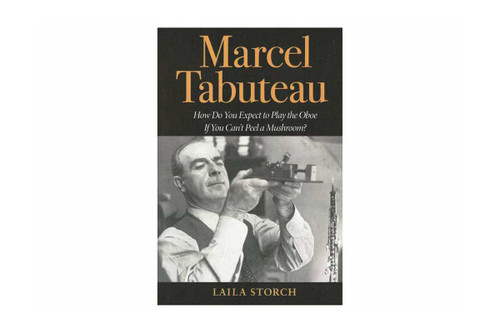